His Excellency, Bishop Doran, makes a candid reference to the Holy Father's humble example of distributing Communion to kneeling Catholics only. The bishop of Rockford (Illinois) also goes as far as to say that the Holy Father's action has MEANING!

This is most certainly a "crack in the dike" of USCCB solidarity. The USCCB's attempt to undermine the Pope's intentions by "staying mum" cannot survive an open discussion! The USCCB's "stand for Communion " [and "stand against the pope"] rule can last only as long as discussion is strangled and ignorance reigns.
Posted by Kneeling Catholic at 11:13 AM No comments:

Kneeling Catholic takes on Reverend Know It All 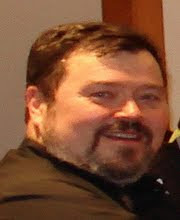 
I love RevKIA's style and follow his blog. From previous posts Father has written, I assumed he was a friend to kneeling Catholics. Not so! Father apparently believes kneeling Catholics are disobedient! Not to mention prideful-attention-grabbers!

Father, when someone kneels in Communion line it makes them harder to see.

(Most soldiers who have been under fire will tell you, keeping low to the ground makes it harder for enemy snipers to spot you.)

Often the only people to notice kneeling Catholics are:

1. The minister of Holy Communion

2. The altar server at his side

3. The person immediately behind the kneeling Catholic.

Anyone else noticing must be making a real effort, or else watching the Communion line on TV!

Father! (I tried to post this on his blog but was unsuccessful)
How many people have you seen tripped by a kneeling Catholic? I'm serious.
I normally love reading your blog, but this remark is quite hurtful. If you're going to discuss why kneeling Catholics get on your nerves, then why not begin by explaining how the Holy Father and the Vatican have confused us by stating, in deed and in word [http://kneelingcatholic.blogspot.com/2011/08/i-must-say-thankyou-to-deacon-kandra.html], that kneeling Communion is preferred?

I frankly do not see the benefit of 'obeying' local clerics who themselves are disobediently ignoring the Pope's intention, and are using their authority to command us to disregard him as well. Maybe the best way for you American clerics to teach us obedience would be for you, yourselves to model it!

There is at least one parish in America listening to the Holy Father`s liturgical concerns.(St. Anthony's of the Arlington diocese) 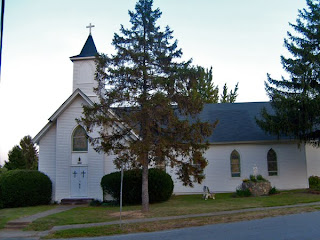 Father B. has many kneeling communicants, and his N.O. mass is said Ad Orientem. K.C. has this from a Baptist friend who attended, and who was quite taken by the holy reverence and holy silence there. btw, it wasn't silent because there weren't parishioners. The church was packed.

If being attractive to protestants is what the liturgy is about, -and this is what our brothers and sisters with the tambourines tell us-, then here is one instance of a Baptist being drawn and captivated by the simplicity and beauty of an old fashioned 'low-mass''. This, of course, reminds me of the first remark I ever read from Bishop Athanasius Schneider: that if a Muslim were to wander into a Catholic church and were to see Catholics on their knees-- receiving Holy Communion--it could not help but impress him, and also serve as a living testimony to Truth of our Faith.
UPDATE: This diocese was invilved in some controversy, back on 2002-acc to les femmes-regarding kneeling. It certainly seems to be on the right track now!
Posted by Kneeling Catholic at 7:30 PM No comments: 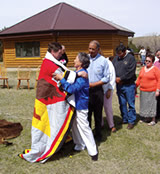 From
http://fratres.wordpress.com/
comes news that Bishop Blaze Cupich, AKA Wakinya Ska
http://www.rapidcitydiocese.org/westrivercatholic/2007/May/7_LakotaName.htm
has forbidden his priests and seminarians from praying outside of abortion clinics.
If this is indeed the case, this would be another example of a progressive, inculturating, American bishop who is trying to put a distance between himself and pro-lifers.
There is a bond between reverent worship of God and reverence for life.
update:
On the eve of the 2008 presidential election, Bishop Cupich wrote an op-ed piece for America magazine condemning Catholics who might vote against Barak Obama solely because he was black. Cupich tried to maintain an even-handed appearance saying it was also evil to support any politician solely because they were "pro-abortion".
Please note that his Excellency did not say it was sinful to vote for a candidate because he might be "pro-choice", which in many people's minds is not the same as "pro-abortion". Nor did the bishop say voting for a candidate because he is "pro-abortion" AND pro-homosexual marriage is sinful. Bishop Cupich said voting "pro-abortion" is only sinful if being "pro-abortion" is the "sole" issue..........
In any election people have many reasons to support one candidate or to oppose another. Some of these reasons may be wise and good, some not so good, and others simply wrong. The promotion neither of abortion nor racism can ever be a motivation for one’s vote. Voting for a candidate solely because of that candidate’s support for abortion or against him or her solely on the basis of his or her race is to promote an intrinsic evil. To do so consciously is indeed sinful. That is behavior incompatible with being a Christian. To allow racism to reign in our hearts and to determine our choice in this solemn moment for our nation is to cooperate with one of the great evils that has afflicted our society. In the words of Brothers and Sisters to Us, “It mocks the words of Jesus, ‘Treat others the way you would have them treat you.’”Blase Cupich
Nowhere does the bishop say it would be a good thing to vote against a politician because he is "pro-choice"!
Posted by Kneeling Catholic at 10:03 PM No comments:

Christine has an excellent post about priests who give scandal by their callous treatment of the Holy Particles.

This is one of several good points which, if logically stressed, does fatal damage to any-old-way Communion. The Church teaches that each of these tiny Particles is all of Christ, Body-Blood-Soul-Divinity.
(The Jesuit Martyr Edmund Campion expressed a similar logic when he stated that one Drop of the Precious Blood could redeem a thousand worlds!).

If any of the above is the case in a parish, (i.e. the Particles of the Sacred Species are being treated with indifference), then the Truth of the matter is either:

a) not believed
b) callously disregarded


k.c.
Posted by Kneeling Catholic at 2:18 PM No comments:

Have Mark Shea and James Akin seen this?

This is Michael Voris 19APR discussion about Catholics who kneel for Holy Communion....
He addresses many of the weak arguments trotted out against kneeling e.g...
1) kneeling makes people trip
2) kneeling slows down the queue
3) kneeling makes people with bad knees feel left out
4) etc....
http://www.youtube.com/watch?NR=1&v=8pA-kLY2CkY

Voris demonstrates that the people who make these arguments are world champion one-minute-scholars, i.e. people who believe 60 seconds of contemplation given to any particular topic is sufficient to master it.

If either Mr. Shea or Mr. Akin can refute even one of Voris' arguments in this video, I'll shut this blog down! Oh yeah, Frank of YIMCatholic, you are also welcome to try and shut me up-as well! I'll even print your posts when you 'dare' to disagree with me .......

Ok, don't limit yourself to answering Voris' arguments here...make some of your own!


Dean>>>An announcement will be made as soon as everything is set. It shouldn't be too much longer. Hang in there please!! Viva Cristo Rey!!<<<

Dean!! You have us on pins and needles! I for one, want a T-shirt!

Posted by Kneeling Catholic at 9:50 PM No comments: