From Fr. Blake's blog we learn that the Archbishop of Westminster believes.....homosexual unions which imitate the permanence of marriage are a good thing!  btw he also really does not like Catholics kneeling....
http://kneelingcatholic.blogspot.com/2011/07/archbishop-nichols-pressures-catholics.html 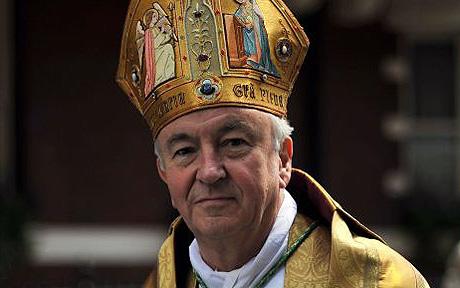 The Archbisop of Westminster said at a recent press following the Bishop bi-annual meeting:


We would want to emphasise that civil partnerships actually provide a structure in which people of the same sex who want a lifelong relationship [and] a lifelong partnership can find their place and protection and legal provision,
............
As a Church we are very committed to the notion of equality so that people are treated the same across all the activities of life. The Church holds great store by the value of commitment in relationships and undertakings that people give. Stability in society depends upon the reliability of commitments that people give. That might be in offering to do a job but especially in their relationships with one another. Equality and commitment are both very important and we fully support them.
..........

He did go on to say, "equality and commitment do not amount to marriage".

As is pointed out here, "The bishops conference position on civil partnerships appears to have shifted from 2003 when it told the Government that civil unions would not promote the common good and we therefore strongly oppose them".
It appears that the 2003 CDF document Legal Recognition of Homosexual Unions only applies to Marriage, itself not "civil partnerships. I had obviously misunderstood as the bishops once did.

Posted by Fr Ray Blake
Posted by Kneeling Catholic at 10:19 PM No comments:

[Friends,  this article is from "TPM".  I post it only because it betrays Newt Gingrich's solid Protestant bias.  i.e. Gingrich's implication - in his interview below- that " the Virgin Mary was not perfect" .

There are those among us who are jaundiced towards converts --mostly because of  the deficient state of catechism for adult converts (RCIA classes) . How much Catholicism are they taught? (before they get paraded before the Faithful as modern-day St. Pauls "fresh from Damascus")


Certainly Mr. Gingrich, who is "the smartest man in the room" could not so blithely say such a thing if he were:

either   a) aware of Catholic Marian dogma or

or         c) more concerned with testifying to what is True than pandering to Christians who believe the Blessed Virgin was a sinner.


Newt: I’m Not The Perfect Candidate — Nobody Is Perfect, Except Christ

from Eric KleefeldNovember 28, 2011, 1:34 PM700396
(Gringrich) “I think — look, anybody who’s honest about it knows that no person except Christ has ever been perfect. So I don’t claim to be the perfect candidate. I just claim to be a lot more conservative than Mitt Romney, and a lot more electable than anybody else.
And I think if you look at my track record of reforming welfare, cutting taxes, balancing the federal budget for four straight years, leading House Republicans to their first majority in 40 years, and their first re-election as a majority since 1928, I think that stacks up pretty well.”
Gingrich has previously invoked the grace and forgiveness of God when dealing with a key imperfection of his: His past infidelity and divorces.
Posted by Kneeling Catholic at 7:36 PM 1 comment: 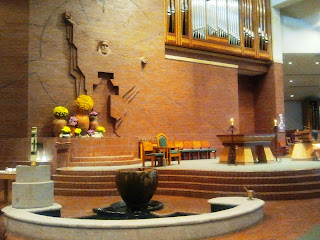 Archbishop Gomez is considered "conservative".  He was only in San Antonio after 2004.  Maybe this is not his baby?﻿

Posted by Kneeling Catholic at 5:42 PM No comments:

From Indianapolis last week.  Sponsors for the event included GIA and WLP music publishers, and Lifeteen, among others.

Posted by Kneeling Catholic at 9:40 AM No comments:

Great news from France, where it was announced that Father Michel, the hero of Thiberville, is now allowed to have his own parish in Le Planquay, in the smallest church of the diocese.
Le Planquay is merely 5 km away from Thiberville. Let’s call it a nice walk, or bicycle ride.
What appears evident to me is that the intent here was certainly not to “punish” Father Michel with a small church, but to allow him to remain as near as possible to his congregation.
Unfortunately, whilst Bishop Nourrichard has been clearly bypassed by the decision – forced on him by the Congregation for the Clergy – the bad news is that said Bishop Nourrichard remains in charge of the diocese. In time, perhaps, this problem will be sorted out, too.
We should pray for Bishop Nourrichard, of course. I promise you I’ll try until I succeed.
For the moment, let us rejoice for Father Michel and for his brave parishioners, soon able to have their beloved priest again.
Bishop Nourrichard was appointed to his present position by the current Pontiff.

also for French speakers.....  this is most likely the source for Mundabor

Posted by Kneeling Catholic at 7:02 PM No comments:

Actually, it was last week that "Tu Reinaras" was sung.

Let's not forget Vincente Fernandez' tribute to the Cristeros!  Here is Vicente, live!

Posted by Kneeling Catholic at 7:50 PM No comments:

Mr. Barroso begins discussing Cristiada at about 20 minutes into the program.....

About 25 minutes into the program Mr. Barroso explains that the plans are to release the film in 2012 during Holy Week!
Posted by Kneeling Catholic at 3:14 PM No comments: 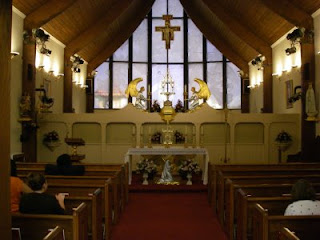 Friends!
This morning I watched the (daily) morning Mass on EWTN. It occurred to me that even though many communicants there do kneel for Communion, the ministers of Holy Communion still do not give them a kneeler, nor is there a Communion rail in the chapel, and additionally the ministers stand on the step above the communicants which makes it even more apparent that they are discouraging kneeling Catholics!
"If you must kneel, (sigh) then kneel, but I might just tip over on top of you!"
Add to the above, that the altar appears to be wooden, and you start to perceive subliminal messages: "No Reform of the Reform needed!" or maybe "USCCB Rocks!"
Maybe it's just me!
Posted by Kneeling Catholic at 12:41 PM 1 comment: