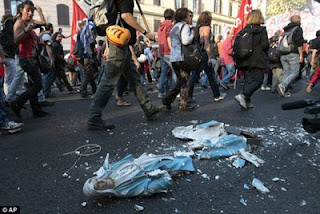 Subsidiarity--that governments should be as localized and as small as possible-- is part of the Church's social teaching.  Cardinal Turkson's idea contradicts it.  not only does he contradict "subsidiarity", he contradicts himself.  He seems to be saying...."the solution to the problems of globalization is more globalization!"
Posted by Kneeling Catholic at 7:16 PM No comments: 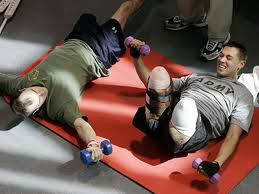 It seems that the Republicans have taken Bill Clinton's advice "it's the economy, stupid" to heart. All GOP talk is about the President Obama's dismal economic ventures.

Whatever has happened to the party of our nation's security?

What has happened to the party of our nation's honor?

The fact remains we have put our hands "to the plow" in Iraq and Afghanistan, and it has cost our "military families" dearly. Not all have lost loved ones or limbs. But many have. What lesson have we learned from their sacrifice? Do we "look back" now? And say "It was all a big mistake! (Sorry!)" ????

Republican hopefuls now compete with one another over who would be quickest to bring our troops home! Some are even labelling Afghanistan "Obama's war"! They never mention the "V" word perhaps because it is axiomatic that in war there are only two possible outcomes: victory or some version of defeat and they have opted for the latter.

This is dishonorable in the extreme. Thousands have willingly laid down their lives and tens of thousands have willingly surrendered arms, legs, even testicles (It is a sad fact that half of the blasts that blow off legs do not detour around the genitalia). Do we not owe it to them, our heroes, and to our national honor to do whatever it takes to win these wars? Do Mitt Romney and crew really think we have been defeated? Can they, like modern day Pilates "wash their hands" and pretend we can just run away and bear no responsibility for the ensuing slaughter of Afghanis and Iraqis who cooperated with Americans?
Posted by Kneeling Catholic at 8:31 PM 2 comments:

His Excellency, Bishop Morlino, along with Phoenix' Bishop Olmsted, have both called into question the practice of frequently distributing Christ's Blood during Holy Communion. More than questioning the practice, they are restricting it! Bishop Morlino has pointed out that the original permission for the practice was granted only for a 30 year trial in 1975. Finally we have a Bishop who can do the math!

The practice of distributing under both kinds is a source of all kinds of liturgical confusion. "If I receive the Host in one location and then have to walk 30 feet to another site to receive the Blood, then what sign of reverence is required before the Chalice being as I still carry the Body of Christ in my mouth? What about the three or four other extraordinary ministers I must pass getting back to my seat? a genuflection for each?

The question of "both kinds" is closely bound to the practice of multiplying exctraordinary ministers of Holy Communion. They stand everywhere, so there are multiple foci of worship for a believer approaching the Sacrament. He is likely to pass three or four Sacred Species prior to arriving. This is how the practice breeds 'familiarity', and then a lackadaisical attitude towards the Sacrament.
Posted by Kneeling Catholic at 2:13 PM No comments:

is father Michel of Thiberville gone?

Posted by Kneeling Catholic at 1:51 PM No comments:

Steven Janco's New Gloria Has People 'Swayin' to the Music'!

Corpus Christ Cathedral debuted the new translation of the Gloria this Sunday. The musical accompaniment was by Steven Janco, of World Liturgical Press, Renssalear Program.

The tune is a fast waltz rythm, and it is apparently difficult to keep from swaying to the 6/8 beat. We noticed one of our priests "movin' and groovin'" to the new tune. I'm afraid this is an example of trying to mix oil with water. It's possible if you stir really hard! I believe it would be more congruent with the Holy Father's intention simply to apply Gregorian melodies (now that the Gloria has been translated to follow Latin phrasing.) Or, even to some of the beautiful polyphonic settings, e.g. William Byrd here: http://gloria.tv/?media=200920.

This might disappoint composers looking to get a lock on becoming the "Marty Haugen" for the new Translation, - and to turn a quick profit. Sorry.

There is also the need to prevent as much as possible Church funds being funneled to the same tired-old composers who have been part and parcel of the Church's decline over the past 50 years. Bill Veeck was once asked his opinion of the high salaries paid to superstars. Veeck replied that he wasn't bothered by the high cost of excellence, but that he was aghast at the high cost of mediocrity. We've paid enough! Let's have excellence!

Let's not fund the Pope's enemies!
Posted by Kneeling Catholic at 10:12 AM 1 comment: