I missed this three years ago.

When the Holy Father spoke out clearly against IVF.......

This is in continuity with  the Pope's before him.

..............from By Francis X. Rocca Catholic News Service
11.17.2014 12:00 AM ET
VATICAN CITY (CNS) -- Pope Francis denounced a "false compassion" that would justify abortion, euthanasia, artificial reproduction technologies and medical research violating human dignity. And he urged medical doctors to "go against the current" and assert "conscientious objection" to such practices, which he called sins "against God the creator."
The pope made his remarks Nov. 15 in a meeting with members of the Association of Italian Catholic Medical Doctors.

"The dominant thinking sometimes suggests a false compassion, that which believes it is helpful to women to promote abortion; an act of dignity to provide euthanasia; a scientific breakthrough to produce a child and consider it to be a right, rather than a gift to welcome; or to use human lives as guinea pigs, presumably to save others," Pope Francis said.

"We are living in a time of experimentation with life. But a bad experiment. Making children rather than accepting them as a gift, as I said. Playing with life. Be careful, because this is a sin against the Creator: against God the creator, who created things this way," the pope said.

Catholic moral teaching forbids abortion, euthanasia, the use artificial reproduction technologies such as in-vitro fertilization and research that involves the destruction of human embryos.
"Fidelity to the Gospel of life and respect for life as a gift from God sometimes require choices that are courageous and go against the current, which in particular circumstances, may become points of conscientious objection," Pope Francis said.
Posted by Kneeling Catholic at 4:31 PM No comments:

There are still Heroes at the Vatican!! 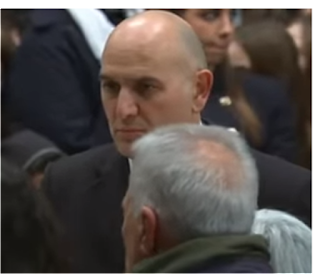 He has the face and demeanor of a Secret Service body guard.
That's good because he is a Body guard.


Sisters and Brothers, all is not lost with this papacy! Watch this past Christmas Vigil Mass from beginning to end. The music and overall reverent atmosphere are beautiful.  Thanks to MSGR Marini and his 'Body guards', there is no hand Communion,

There is even kneeling for Communion @ 1h31m00s and a beautiful kneeling for the Creed 'et incarnatus est...' (57m30s)


Do not lose hope!  Cardinal Sarah still reigns at CDW and apparently MSGR Marini is continuing his reverence revolution he began under Pope Benedict. (and the Holy Father will [[I HOPE]] regularize SSPX without them swearing to Vatican II) These things are not nothing!

The Holy Father is letting MSGR Marini continue on his way.  That should tell us something.

Posted by Kneeling Catholic at 5:19 PM No comments:

(From US Border Patrol Website) The 'Fiscal year' 2017, which ended 30 Sept, recorded the 2nd lowest number of border migrant deaths, 294, going back thru the two presidencies of Obama and Bush.  Trump wasn't president the first four months of the Fiscal Year but already his first year total was almost 80 fewer deaths than the annual average of 370 deaths per year for Obama and 384 deaths per year for Bush.statista

Sadly, the facts can't stop the AP and USAToday from claiming....
migrant deaths up  !!??? 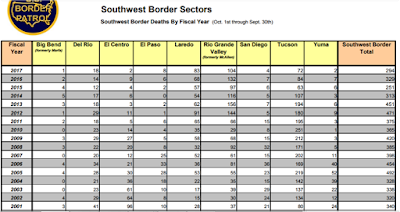 Posted by Kneeling Catholic at 5:29 PM No comments:

In this TIME article, Abortion helps your career, Senator ElizabethWarren ticks off the advantages of abortion over live birth with some of the following gems......

"Immediately after having children, women experience a measurable decline in take-home pay — a decline that continues throughout their lives and on into retirement."

"(for) a student still in high school or working toward her college degree, an unexpected pregnancy can derail her most careful plans for financial independence."

Warren follows up with the following WHOPPER....

"A lot of women are alive today because of Roe."

Senator Warren pays no tribute to, nor does she even ackowledge, even one pro-life arguments...like:

-there are two lives to consider, not just one  or....
-abortion goes against the teachings of all traditional Faiths nor...
-abortion causes longterm psychological issues
-abortion targets black people (who are aborted at 3X the rate of white people) nor...
-had America's 60 million aborted babies lived, then we would be a far richer nation now with no Social Security crisis ....etc

Warren doesn't  bother addressing ANY of her opponents' concerns above, nor does she even mouth President Clinton's 'Safe, Legal and Rare' platitude.

I fear this reflects a soulless attitude on her behalf....one that argues moral questions SOLELY from the standpoint of economics, and then thinks that pretty much covers it
Posted by Kneeling Catholic at 10:52 AM No comments:

TRUMP TO MARCHERS: 'WE ARE WITH YOU ALL THE WAY'

I have found some references to Bush I phoning in support....just haven't been able to track it down yet.

Posted by Kneeling Catholic at 12:40 PM No comments:

Trump will become the first sitting president to address the 2018 March for Life via a live video.

Trump will address 2018 March for Life
Posted by Kneeling Catholic at 5:01 PM No comments: 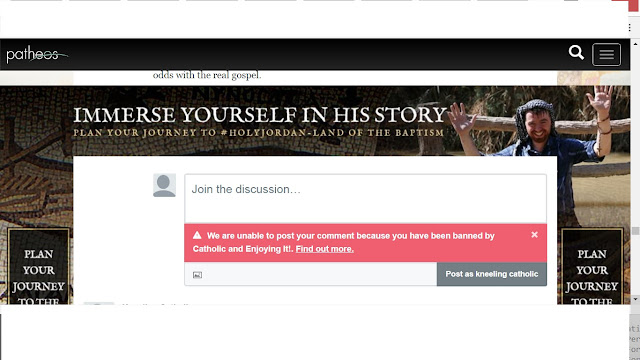 I recently found this BBC portrayal of St. Dominic debating an Albigensian 'Bishop'.

I love the video, even though it was probably intended to put Dominic in a bad light.
A dear protestant lady I know watched it as well. I thought it might stir her to some Catholic sympathies seeing Dominic passionately defend:

1. Our Lord's Incarnation
2. The God of the Old Testament
3.  Our Lord's Redeeming Sacrifice

against a true modern and scoffing know-it-all.

Naaaaa! She came away sympathizing with the Albigensian!

Do Protestants dislike Catholicism more than they dislike heresy?

I found a great historical Podcast about the Munster Anabaptists!

What is the connection between two sets of heretics separated by 300 years?  In short: The Incarnation. Somehow, almost all Anabaptists denied that Christ was 'Incarnate of the Virgin Mary', just as had the Albigensians 300 years earlier.
This is remarkable! It could be

b) it could be evidence that the Church never completely stamped out an Albigensian underground.

Most histories of the early Anabaptist leaders record that they had strong connections with the Reformers centers in Wittenberg, Zurich and Strasbourg and many of these leaders were originally priests...These two factors make it seem that both movements' denying our Lord's Incarnation could just be a coincidence.

However there are other factors that make you wonder. Such as:

1. The French Protestant Huguenots sprang up in some old Albigensian strongholds..among other places. (granted these were Reformed Protestants, not Anabaptists, NTL the early reformers were in close contact with Anabaptists.  John Calvin married one when he lived in Strasbourg)
2. Some French Protestant Huguenot historians were keen on reclaiming the Albigensians as their Christian forbearers (much like John Foxe and the Magdeburg Centuriators)
3. The Weaver connection.....Both the anabaptist and Albigensian movements seem to have spread among weavers....Queen Elizabeth even resorted to making weavers swear an oath to the Incarnation..perhaps a 'trade secret' of the weaver's guild was the Albigensian heresy?  Crazy!!


Posted by Kneeling Catholic at 3:47 PM No comments:

The purported purpose of the display is to remind people of the seven corporal works of mercy. It reminds me of nothing so much as the Disney torture-chamber ride, “It’s a Small World After All”. The eye is drawn to nothing except the Nude Dude, reminding one to renew his gym membership so he is ready for swimsuit season or other clothing optional events. <<<<<<<<<<<

ROFL
Posted by Kneeling Catholic at 7:11 AM No comments: