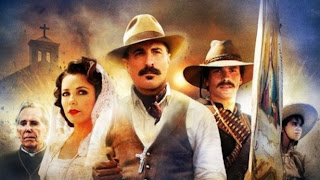 http://uniradioinforma.com/noticias/articulo112602.html
Posted by Kneeling Catholic at 11:23 PM No comments:

How to eradicate Communion on the tongue 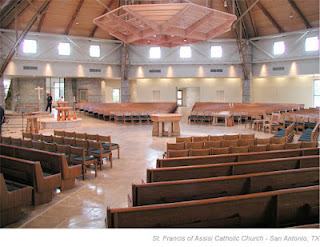 Kneeling Catholic had a source in the San Antonio area who contributed to this report.....

St. ------ parish, a wealthy parish on the north side of San Antonio has found a way to make certain no-one can receive Holy Communion on the tongue.  They use a version of the Cardinal Schonborn balloon mass.  Whole wheat leaven bread is consecrated and the extraordinary eucharistic ministers freely divy up the portions into the ciboriums with their bare hands.  Then the the tiny Morsels are distributed by extraordinary eucharistic ministers, holding Them between their thumb and forefingers.  Given this circumstance, it would be impossible for the minister not to virtually handle the communicant's tongue, so no one dare's to stick out their tongue...

btw, before someone tries to say this is an Eastern Catholic tradition, i.e. consecrating leavened bread, let me just inform you ahead of time.  Eastern Catholics laity and Orthodox Christians never, ever, ever touch the Holy Species with their hands.  period.  (the priest distributes Communion with a spoon composed of a precious metal).
Posted by Kneeling Catholic at 7:46 PM No comments:

Many traditionalists had hoped that our new liturgical translation would have the happy effect of forcing liturgists make a clean sweep of much of the banal musical settings which have entrenched themselves over the past 40 years or so.  That hope is not being realized.

The most entrenched and most controversial of the 70's generation composers is Marty Haugen.  Jeffrey Tucker of NLM treats Haugen's "Sanctus" here.....

I really have to wonder how much money Mr. Haugen receives each time we sing his tunes.  It reminds me very much of what the Bill-Gates--haters say about Gates and Microsoft.  i.e. he has ensured that mediocrity is everywhere, and that everyone must pay top-dollar for it.

Mr. Haugen, a protestant and a women's ordination advocate, refuses to join the Church for the latter reason.  At least he is honest.  NTL I pray for the day when Catholics decide not to support liturgists and composers whose sentiments and/or agenda is 180 degrees out of sync with the Church's.
Posted by Kneeling Catholic at 10:24 PM No comments:

....Before reflecting on the content of Jesus’ petition, we must still consider what the evangelists tell us about Jesus’ posture during his prayer. Matthew and Mark tell us that he "threw himself on the ground" (Mt 26:39; cf. Mk 14:35), thus assuming a posture of complete submission, as is preserved in the Roman liturgy of Good Friday. Luke, on the other hand, tells us that Jesus prayed on his knees. In the Acts of the Apostles, he speaks of the saints praying on their knees: Stephen during his stoning, Peter at the raising of someone who had died, Paul on his way to martyrdom. In this way Luke has sketched a brief history of prayer on one’s knees in the early Church. Christians, in kneeling, enter into Jesus’ prayer on the Mount of Olives. When menaced by the power of evil, as they kneel, they are upright before the world, while as sons and daughters, they kneel before the Father. Before God’s glory we Christians kneel and acknowledge his divinity; by that posture we also express our confidence that he will prevail......


Posted by Kneeling Catholic at 1:22 PM No comments:

Bishop Athanasius Schneider calls for laity to convert the clergy 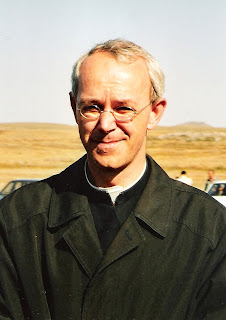 Thanks to "Paix Liturgique" for this translation of the end portion of Bishop Schneider's JAN 2012 keynote address to "Reunicatho", an organization formed to bolster the pope's Motu Propio.....


For this reason we need new saints today, one or several Saint Catherines of Sienna. We need the “vox populi fidelis” demanding the suppression of this liturgical rupture. The tragedy in all of this is that, today as back in the time of the Avignon exile, a great majority of the clergy, especially in its higher ranks, is content with this rupture.

Before we can expect efficacious and lasting fruits from the new evangelization, a process of conversion must get under way within the Church. How can we call others to convert while, among those doing the calling, no convincing conversion towards God has yet occurred, internally or externally? The sacrifice of the Mass, the sacrifice of adoration of Christ, the greatest mystery of the Faith, the most sublime act of adoration is celebrated in a closed circle where people are looking at each other.

What is missing is “conversio ad Dominum.” It is necessary, even externally and physically. Since in the liturgy Christ is treated as though he were not God, and he is not given clear exterior signs of the adoration that is due to God alone because the faithful receive Holy Communion standing and, to boot, take it into their hands like any other food, grasping it with their fingers and placing it into their mouths themselves. There is here a sort of Eucharistic Arianism or Semi-Arianism.

One of the necessary conditions for a fruitful new evangelization would be the witness of the entire Church in the public liturgical worship. It would have to observe at least these two aspects of Divine Worship:

1) Let the Holy Mass be celebrated the world over, even in the ordinary form, in an internal and therefore necessarily also external “conversio ad Dominum”.


2) Let the faithful bend the knee before Christ at the time of Holy Communion, as Saint Paul demands when he mentions the name and person of Christ (see Phil 2:10), and let them receive Him with the greatest love and the greatest respect possible, as befits Him as true God.

Thank God, Benedict XVI has taken two concrete measures to begin the process of a return from the liturgical Avignon exile, to wit the Motu Proprio Summorum Pontificum and the reintroduction of the traditional Communion rite.

There still is need for many prayers and perhaps for a new Saint Catherine of Sienna for the other steps to be taken to heal the five wounds on the Church’s liturgical and mystical body and for God to be venerated in the liturgy with that love, that respect, that sense of the sublime that have always been the hallmark of the Church and of her teaching, especially in the Council of Trent, Pope Pius XII in his encyclical Mediator Dei, Vatican II in its Constitution Sacrosanctum Concilium and Pope Benedict XVI in his theology of the liturgy, in his liturgical magisterium, and in the Motu Proprio mentioned above.

No one can evangelize unless he has first adored, or better yet unless he adores constantly and gives God, Christ the Eucharist, true priority in his way of celebrating and in all of his life. Indeed, to quote Cardinal Joseph Ratzinger: “It is in the treatment of the liturgy that the fate of the Faith and of the Church is decided.”