Posted by Kneeling Catholic at 8:21 PM No comments: 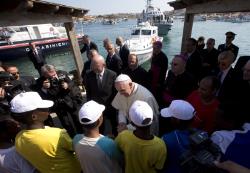 Let me give you a hypothetical.  A millionaire advertises a contest where he pays 10,000 $ to anyone who will dare to cross the English channel in a homemade raft.  The millionaire makes it clear he doesn’t have infinite resources with which to rescue unfortunates, i.e. there is some risk involved.  The event is scheduled with hundreds of entrants and successfully proceeds with many winners and many losers who are fished out of the sea by the millionaire’s rescue boats.  NTL at sunset that day a handful of rafts still remain unaccounted for.  Who would bear the blame for these tragedies in such a scenario?

Or how about this? A taco stand owner across from an elementary school is asked by the school’s principal to deny service to any children who do not use the crosswalk.  The owner wants to be cool with the kids-not to mention not lose customers- so he ignores the school’s request, opening his generosity to all comers – and even gives free goodies to the first children to arrive during lunch hour.  The lunchtime chaos continues until one day a very speedy ten-year-old girl, outrunning her classmates, charges out in front of a cement truck, sadly thinking it can brake on a dime…   Who would bear the blame for this tragedy?

I recently found an article which summarizes Mediterranean boat people death statistics since 2001. (http://mapreport.com/subtopics/d/migrant.boat.accident.html  )  The authors do not insert Francis’ July 2013 visit to Lampadusa where his Holiness railed against restrictive immigration policies in order to show his solidarity with the cause of Muslim boat people immigration, and where he called for Catholic churches around Italy to open their doors to refugees, but they should have.   The article’s grim statistics indicate that drownings in the Mediterranean after His Holiness’ invitation to boat people dwarf the earlier tragedies. In another article the authors wonder why deaths have 'soared' over the past two years.  The total number of drownings from 2001 to July 2013 was less than 1000, averaging about 100 per year.  Since that time the number has ‘soared’ to about 2500 per year— a 25 fold, 2500% increase.   All this has occurred despite the Italian coast guard stepping up vigorous rescue operations.

I know the post- hoc -ergo -proper -hoc fallacy certainly haunts my inkling that Pope Francis’ well-intentioned words have cost thousands of desperate people, to include women and children, their lives. Please feel free to challenge me and let me know what has happened since July 2013, besides Francis’ open invitation, which might have caused so many more people to risk not only theirs but also their childrens’ lives.  Couldn't he have also cautioned Muslims not to risk their lives on the high seas?

Pope Francis’ venture onto the world political stage, in July 2013 at Lampadusa, Italy, would not be the first well-meaning papal initiative to have had tragic consequences.  I believe it was Pius XI who convinced the Cristeros of the Mexican government’s good faith and the need for the Cristeros’ theretofore invincible army to lay down its arms and go home.  Distinguished French-Mexican Historian Jean Meyer has chronicled how 5,000 Cristero leaders were then hunted down and murdered.  There are probably many better examples of popes whose good faith actions have lead to tragic unintended consequences.
While we are discussing Pius’, let me bring up Pius XII discretion during WWII.  Most of us are familiar with the accusations thrown at Pius XII for not being more vocal against and more provocative with the Nazis.  The other day I read that Pius XII actually was convinced that additional public haranguing – e.g. excommunicating Catholic Nazis who hadn’t been to Mass in decades – would likely only lead to invigorated crackdowns and hundreds of thousands more victims being rounded up.  Pius XII’s course of action was the opposite of grandstanding and was geared to saving as many lives as he possibly could.  His course of action turned out to be right.

Posted by Kneeling Catholic at 9:27 PM No comments:

While trying to figure out what was going on in San Bernardino yesterday (A Muslim man with his mail-order bride from Saudi Arabia shot up his MHMR work-place), I stumbled on MSNBC's twitter feed.  At the time the report was that three white men had carried it out and escaped in a dark SUV.

Perhaps, in the hope that the 'three' would not be caught soon and thus leave the Media a huge blank slate to paint the attack any way they wanted, Jennifer Bendery tried to get the disgruntled-prolifers-again-narrative rolling. twitchy website documents this .

Posted by Kneeling Catholic at 7:27 AM No comments: