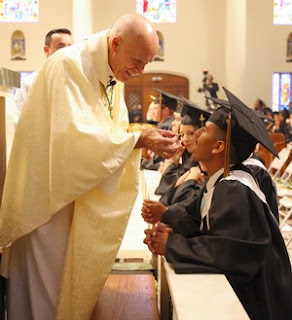 Who is responsible? The new Bishop Mulvey?
Bishop Emeritus Carmody? Father Peter Marsalek, the president of the school?
Posted by Kneeling Catholic at 7:36 AM No comments:

most of Father's blogger's are cautious, e.g. this comment from 'ipadre'>>I would love to use it now, but, I will wait for the signal from my bishop and the USCCB. All of this preparation is good and well, but they did nothing when they forced this current translation on the poor people. < <<

how about this? let’s demand that liturgists stop using the old ICEL ASAP period. (The Vatican has declared it is worthy of the dustbin! If that judgment is warranted, then the time to stop using it has long since passed!) God’s children are hungry and the American Church just keeps feeding them stones.

Let’s just teach the people the ordinary Latin responses as per Paul VI’s wishes. We then can wait 20 years or so until the last ‘Woodstock’ anti-new translation bishop retires and then implement the new translation!

Each year, in only the 6 weeks of Lent, people forget the forgettable ICEL ‘Gloria’. It would be best for them to forget the entire old ICEL liturgy. As long as they keep practicing it, it will never die out.

Picked these up over at Gloria.tv

Don't know the location where this first one is filmed. I hope it was faked!


This one is more of a montage. pitting the beauty of the liturgy of the ages against ...... well-known scenes....including Cardinal Schonborn and his now-famous balloon mass where he consecrated pita bread and passed out huge Chunks to everyone...(Please recall how he sent out his lieutenant to say the Cardinal learned this liturgy from the Chaldeans--who- by the way -lick the Eucharist from the floor if it falls! Ok, your Eminence, I didn't see anyone licking up all those crumbs at your joke of a liturgy!)


Posted by Kneeling Catholic at 11:30 PM No comments: 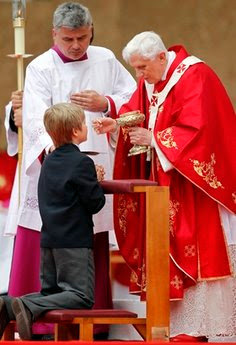 The German title of this, 13 May, video from Gloria.tv is 'lay ministers of Communion'. We see people kneeling for Jesus when they receive from the Pope, but everywhere else it is Communion AOW [any old way]!

Brigadier Cristero inspires us with Bocelli's 'Our Father'

btw, those guys with the white hoods are penitents. The scenes towards the close of the video are from a Holy Week procession in Spain. Apparently it has long been customary, hundreds of years before the KKK copied them, for penitents to wear hoods which point towards heaven.

Posted by Kneeling Catholic at 11:52 PM No comments:

…(40 seconds into the tape) …it was a huge tragedy in that the Mexican people knew how to respond, and in a specific way they knew how to fix the errors of their authorities, authorities from both sides… their political authorities from the side of the state and their ecclesiastical authorities from the Church’s side…. They [the people] were often seen as nothing more than a pawn on a chess board to be moved around … neither the state nor the Church in their games of opposition and lies, could ever dream that Catholic people were capable of rising up in arms…and the political and military authorities were oppressing the people…thinking that being a Catholic incapacitated you, they thought that Catholicism was only for old people … or for cowardly men…Never did they think the Catholics could rise up in arms. And when they did take up arms, the authorities never thought that the war was going to be so difficult and to last for three years …. [in an earlier episode Meyer recounts the miracle of how the Cristero insurgency could survive for three years without ANY outside help and battle its well supplied, atheist/leftist, government to a standstill . The 'settlement' to the stalemate was negotiated by the Church. The 50,000 Cristeros laid down their arms and went home. Many were then arrested and hung. The Church went on being controlled and persecuted. ]

Posted by Kneeling Catholic at 2:25 PM No comments: