The First Lady's Our Father , where she quietly blasted a hole in the 'Wall' separating American  Church and State, reminds me.... 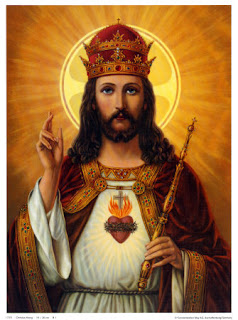 During the American Civil War,  some abolitionist Protestant ministers began lobbying to have our Lord's name inserted into the preamble of the Constitution.  Their argument, bluntly, was: God is punishing America for leaving His Son out of its Constitution.  President Lincoln met with them and expressed sympathy but was assassinated before his sincerity was ever tested.

The ministers' association's idea was to make the US Government leaders and their bureaucracies pay lip service to Jesus Christ as Lord of the nations.  It  faded away at the time, but has been visited a number of times since then, never quite catching fire.(until recently? more on that later)  The story of the 'National Reform Association' (NRA) is no secret, though it may as well be .

Today's atheist secularists, such as Christopher Hitchens (RIP),  have made much hay of the fact that many of America's founding Fathers entertained as much animosity towards the Christian religion as modern atheists do.  In this regard, I am afraid Hitchens was closer to being right than many of today's 'consititutionalists' who claim that the U. S. Constitution squares up perfectly with Christianity or at least with 'judeo-christian' values.  If America was designed to be Christian, then why has it taken a secularist path?

I am afraid that while our guiding fathers assumed that  Religion might be a good help  to keep the masses from adopting nihilistic morality, they  also assumed that Religion is a dangerous force which must be resisted and contained.  If all faiths are to be treated equally, then all faiths must be equally valid. This is logically impossible unless they are all equally fantasies! From such a hidden axiom we get our Jesus-less, platitudinous, public prayers uttered by a neutered clergy.

Thought experiment: Let's rewind the clock and imagine how different America might have acted had the National Reform Association succeeded.  Would Pius IX have opposed the NRA's effort? Leo XIII? Pius XI?  Would simple act of forcing the State to honor our Lord's Name have done anything to resist:

would our Lord Jesus' name have had no effect?

*establishing Christianity as the national religion

Where am I going with this?  I am still wondering myself.

Posted by Kneeling Catholic at 5:22 PM