I was surfing our local talk radio stations the other day and an item caught my attention.


Here are some questions the Marijuana pushers will never, ever ask nor answer....

1.  Is Marijuana smoking a cultural phenomenon, and if so, with what kind of culture does it breed?


2.  Does the government have a duty to protect culture? I.e. is culture worth protecting? (to those who might respond that it's not the government's role to protect our way of life, I conclude: then--in your world-- it's ok for government to pursue the demolition of culture and never protect it!)
3.   Since marijuana is proven to induce psychosis in many people, why isn't reducing its usage a public health issue?
4. Since legalizing pot is proved to increase its usage among teens, is promoting legalization an attack on young people and their futures ?

The libertarian-free-market wing of the Republicans is really showing us what it holds supreme. To them, the only duty of government is to protect the free-market. (AKA protect the right of the wealthy to prey on the rest of us).  If-on -the-way-to-making-new-zillionaires- the free-market demolishes the lifestyles, culture and morals of millions of the poor and middle class, then so be it. They deserve to have their lives ruined. They are morally weak and they should be punished for being weak.

This reminds me of a historical anecdote I once read about while perusing some Muslim propaganda... the story of one of Britain's most preeminent Sephardic families, the Sassoons...The family made their zillions pushing opium on China--even though opium was banned in Britain. It's evil effects on a civilization were not a secret...When the emperor objected to the drug pushing, he confiscated Sassoon's drug ships,.Britain then declared war on China and eventually fought and won two wars in order to force China to buy  opium.  The results were a financial bonanza for the Sassoons but devastating for Chinese people 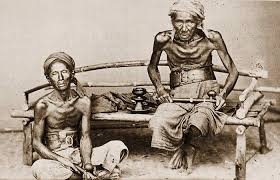 I thought at first, since the Sassoons were devout Jews, that the story was some kind of  antisemitic blood libel.  Turns out, every bit of it was true.
Posted by Kneeling Catholic at 3:17 PM