It's written between the lines in this article...but Biship Scicluna does mention that the number has fallen from a high average of 190 per year for the years 2011/2012 under Benedict XVI,  to about 100 for the year 2013 under Pope Francis.

Bishop S assures the interviewer that this lessening does not go hand-in-hand with Francis' merciful (who-am-I-to-judge?) approach, and that the smaller number is reflective of Pope Benedict clearing the back-log of cases.  The headline appears to be a counter to the obvious conclusion drawn from the contrasting Benedict's and Francis' defrocking numbers. 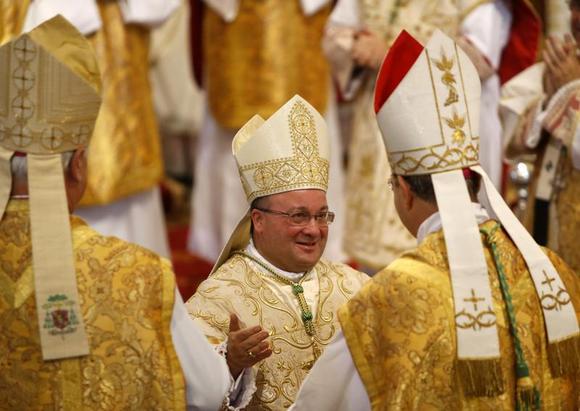 Newly-ordained Auxiliary Bishop of Malta Monsignor Charles Scicluna (C) is congratulated by fellow bishops during his ordination ceremony at St John's Co-Cathedral in Valletta November 24, 2012 in this file picture.

VATICAN CITY (Reuters) - Pope Francis will not show leniency towards pedophile priests because truth and justice are more important than protecting the Church, the Vatican's former sex crimes prosecutor said on Saturday.Monsignor Charles Scicluna, the most authoritative Catholic official on the Church's abuse crisis, also told Reuters that the number of clerics defrocked by the Vatican was likely to have fallen to about 100 in 2013 from about 125 in 2012.
Scicluna said Francis, despite his merciful nature, would be very tough on pedophile priests after an abuse crisis that the pope on Thursday called "the shame of the Church."
"I have met with Francis and he has expressed great determination to continue on the line of his predecessors," said Scicluna, who served in the Vatican for 17 years before he was named an auxiliary bishop in his native Malta in 2012.
"His gospel of mercy is very important but it is not cheap mercy. It has to respect the truth and the demands of justice," Scicluna said in a telephone interview.
The pope, who was elected last March, set up a commission of experts last month to address the sexual abuse of children in the Catholic Church, in his first major step to tackle a crisis that has plagued it for two decades.
The group will consider ways to better screen priests, protect minors and help victims in the face of charges the Vatican has not done enough to guard the vulnerable or make amends.
Scicluna, who served in Rome for 17 years, was the Vatican's expert last Thursday in Geneva when United Nations child protection experts pushed Holy See delegates to reveal the scope of the decades-long sexual abuse of minors by Roman Catholic priests.
A BLESSING
Despite the unprecedented grilling of Vatican delegation, he said the experience was very helpful for the Church.
"We have a great responsibility to our people ... I think it was a blessing that we had this meeting (in Geneva) before the commission is set up," he said. The commission is still in the process of being formed and its members chosen.
Scicluna confirmed that published Vatican records show that in 2011 the number of priests defrocked hit a recent peak of some 260.
He said the rise was due to "contingent backlog problems with some historical cases" and that he expected the numbers were "stabilizing" at about 100 in 2013.
Scicluna said the numbers for most years are made up of about 50 percent by priests who were actively defrocked and the rest by those who had asked to leave the priesthood after they "admit their crimes".
"Dismissal is imposed and dispensation presupposes the request of the priest but the effect is the same," he said.
In 2012, while he was still in his previous job at the Vatican, he created a stir when he uttered the word "omerta" - usually used to describe the Sicilian Mafia's code of silence - in relation to the sexual abuse crisis in the Church.
He used it again on Saturday in response to a question.
"I think there is a clear signal that 'omerta' is not the way the Church should respond," he said. "I am convinced that the best thing for the institution is to own up to the truth whatever it is."
The Church has had to pay hundreds of millions of dollars in compensation in sexual abuse cases worldwide, bankrupting a string of dioceses. Last Thursday the pope said it was right to pay damages to victims.
Victims groups have said more has to be done to protect children and that bishops who have been accused of covering up crimes by shuttling priests from parish to parish should be held accountable.
(Reporting By Philip Pullella)


We welcome comments that advance the story through relevant opinion, anecdotes, links and data. If you see a comment that you believe is irrelevant or inappropriate, you can flag it to our editors by using the report abuse links. Views expressed in the comments do not represent those of Reuters. For more information on our comment policy, see http://blogs.reuters.com/fulldisclosure/2010/09/27/toward-a-more-thoughtful-conversation-on-stories/


Comments (0)
Be the first to comment on reuters.com.
Add yours using the box above. 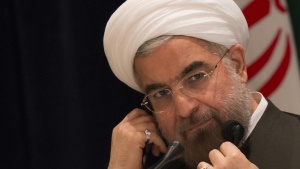 Iran to woo business in Davos but hurdles abound

Iranian President Hassan Rouhani will court global business in Davos next week after winning an easing of some economic sanctions, but any trade bonanza depends on the long-term success of nuclear diplomacy.  Full Article | Full Coverage

Posted by Kneeling Catholic at 10:29 AM